How does LongRange work?

LongRange consists of a server-side management service (LongRange Server) and an app that runs natively on a mobile device (LongRange native mobile app). Users download the app to their mobile device, connect to the server and are ready to use the business applications. The apps can also operate offline when no cell phone or Wi-Fi communications are available.

When a user of a mobile device invokes a form view in the LongRange native mobile app, the action sends a request to the LongRange Server, which calls the associated RPG, COBOL or CL program. These programs can also call other RPG, COBOL, Java or CL programs, web services, message queues etc. The program performs its processing and issues a send screen command. The LongRange Server sends the screen to the app and it presents the screen on the mobile device. The LongRange mobile app is faster than browser-based mobile apps when rendering screens and responding to user actions.

The LongRange app processes input and output from IBM i (System i, iSeries, AS/400) programs with a significantly enhanced user interface on Apple and Android phones and tablets as well as Windows 10/8.1 tablets and PCs. 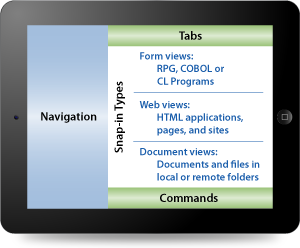 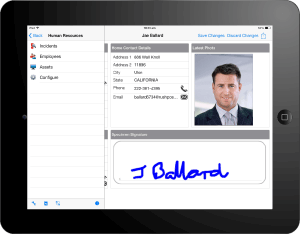 Example of a native mobile app developed
with only RPG and LongRange.

What's in the mobile app?

LongRange is a native mobile app comprising components for navigation, tabs, form views and commands, and it requires installation of the LongRange server on an IBM i server.

An application schema defines the static parts of a business application, including menus (captions and icons of the menu items), form views (tabs), web views, document views and the program to call when a user selects a menu item or requests an action.

The form views are screens generated by RPG, COBOL or CL programs.

Using web views developers can include HTML applications, pages and sites as part of a composite application.

LongRange includes an extensive collection of sample business applications and program templates. The sample applications range from the introductory "Hello World" style of application to fully functional applications. When you run a sample app you can see not only the screens and user actions, but also view the program code.

Use LongRange Studio to define the static parts of an application, such as the menus, the captions and menu item icons, form captions, which program to call when a menu is selected, etc.

Application schemas can include:

Developers can use their existing IBM i development tools and LongRange Studio to develop business applications for use on mobile devices.

Use RPG, COBOL or CL programming languages to develop business applications for use with LongRange. The programs can also call other programs on IBM i servers, use data queues, interact with the database, etc. From a developer's perspective the programs are just like any other IBM i program.

Developers also need an iPhone/iPad, Android or Windows device to test their programs.

For example, a business requirement of an insurance claim system is a photo of a damaged motor vehicle. An assessor with a mobile device can take photos then use the app to save the photos in the database on an IBM i server, or save the files in a folder on the server's file system.

Using LongRange, IBM i programs can also send files to a mobile device from the server.

Operate offline without a network connection

Developers can design apps to operate online with a network connection or offline when no network is available. In offline mode, the apps use data stored in a database on the mobile device and forms that allow users to view and edit the data. When a connection is available, the apps can send data to a server and receive data from a server.

Use LongRange Studio to rapidly create a business application prototype to demonstrate to users. Building a prototype will help to define the required programs, estimate the size of the project, and also identify functionality missing from the design.

Developers build the business application a program at a time, snapping each completed program into the prototype and gradually turning it into a working application. This development methodology is agile and evolutionary. Users do not wait for months or years to work with a completed application. Instead they see an application that grows and adapts quickly to changing requirements.

To assist developers find errors LongRange provides two levels of tracing, one at the program level and a second at the system level. Developers can use tracing during testing or debugging to track activity of individual programs. System level tracing has a wider scope and produces much more trace data than program level tracing.

Deploying the LongRange native mobile app is as simple as downloading the app from an app store and configuring communications with an IBM i server.

Updating the mobile app is the same as enhancing and maintaining any IBM i program. Once you deploy program updates to your production system they are immediately available to users of the LongRange mobile app, without having to download or update anything on the mobile device.

Security is an integral part of the product and is designed to protect data and business applications while making them available to remote users with mobile devices. LongRange supports a number of physical implementations, including reverse proxy, each intended to provide different levels of scalability and performance and without compromising security, including the following:

LongRange Server supports Secure Sockets Layer (SSL) and Transport Layer Security (TLS) protocols which allow for secure authentication, encryption, non-repudiation and VPN technologies. Both SSL and VPNs prevent eavesdroppers from listening and intercepting traffic between a browser and a server.

Communications traffic between a mobile device and the server is compressed which offers two major benefits. Firstly, traffic is harder to monitor with sniffer devices. Secondly, when using SSL or VPN technologies, the amount of data transmitted between a server and a mobile device is reduced before the SSL or VPN encryption or decryption processing takes place. Compressing communications traffic achieves considerable savings in bandwidth and CPU cycles.

The applications run on the server and no business logic runs on the mobile device. Therefore, applications and the database are not exposed to the Internet or internal networks. 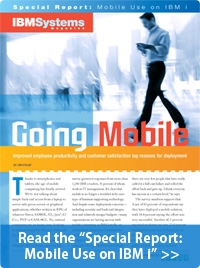